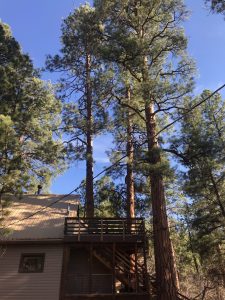 It started, as these things always do, by answering my phone. I never know what to expect when it rings—it could be someone who wants a tiny bush trimmed, or a telemarketer, or maybe someone with something much more interesting for me. This young man was calling to find an arborist willing to drive out to his grandfather’s cabin on Mount Taylor just outside Grants, New Mexico, to remove a couple of ponderosa pines. The only thing was, grandpa thought it would be real keen to build his cabin around two of the ponderosas on his property. AROUND the trees! The trees were incorporated into the deck and the entry way. So the larger tree was actually inside of the house for a story and a half. The holes had to be made larger from time to time as the trees grew and grew, and grew. After three remodels and grandpa’s passing the family decided it was finally time for those trees to go, but by then the larger pondy was 125 feet tall (measured, not guessed) and the smaller one was only 115.

My interest being peaked, I agreed to head out to Grants, a mere 150 miles from Taos. Somehow, I made it all the way to Grants without seeing Mt. Taylor, but it was there waiting for me as I headed north from town, past acres and acres of apparently empty green houses next to the various houses of incarceration. What a sight to behold when I pulled up the long, narrow, and steep driveway. These trees were massive, and as beautiful as they were one could immediately see why they had to go. Figuring out how to get these trees down safely was really fun as these were quite possibly the largest and most challenging trees that any tree service had to remove that year in the whole state. 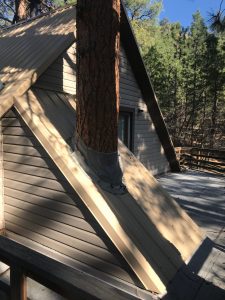 We had to stay in Grants so we could work full days without all the driving, so we got to see lots of Grants. I highly recommend visiting Grants. Good food, good beer, good times. The plan was to climb the two pondys and use a zip-line rigging system to remove all the branches on the way up to the top. Once there, a mere 120 feet up for the bigger one, we would negative block the tops to the spars and work the wood down in this same way until we were too close to the roof to safely take another piece. Then we would have to employ a 20-ton crane to get the wood out of there and safely lifted through the holes in the house and deck. Sounds easy enough right? 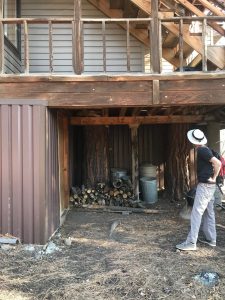 The first days drive went well, we got to the hotel and made merry. The second day we began working the branches off our trees, but the wind was too sporadic and gusty to safely climb to the tops. We had to call it a day early when the rain finally came in. We promise we will always call it a day when the weather turns bad for the safety of our crew and your property, even if it is annoying that we have to come back. The next day we were able to finish the climbs, Sancho in the big tree, and me in the small one. Sancho claims not to be afraid of heights, and she seems to be tickled by them so being that I am quite afraid of heights I let her take the bigger tree. She went all the way to the top, 120 feet up, where the tree was only 5 inches in diameter, she rigged the top and made the cut! She is so amazing. 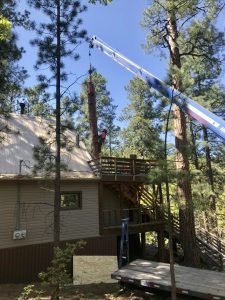 I on the other hand am so wimpy that I could only make myself climb up about 100 feet before I started becoming very very nervous, just another mere mortal swaying back and forth way above the top of the cabin. I decided to change my plan and not negative block my top but instead throw the 15 foot top from there, free falling it and hoping that it would clear the side of the deck. What a wimp, you would agree if you could have heard the noises I made, kinda like a really pathetic pig squeal, but with a jazzy touch of giggles and caterwauls. But at least I was on my way down. 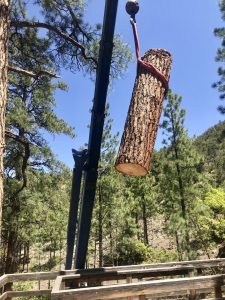 We took a little longer than we thought we might getting down to where we needed to be for the crane, but the zip-line rigging technique worked famously. Sancho still had a little more wood to do so I went to town to meet the crane. When I got to the hotel I was bummed to see the crane wasn’t there because the day was mostly gone. I was worried we wouldn’t be able to finish it that day and then the crane pulled in and I felt my stomach turn. Keeping the feeling down I went to greet the crane operator and tell him he brought the wrong machine. The crane service sent out a 40-ton crane, which the operator assured me would do anything a 20-ton could do, in fact they suggested it might even be better. The thing was, we needed a 20-ton crane because it was SMALL enough to get up the driveway which would be hard enough, but also the area to deploy a crane must be level and the area at the top of the driveway would barely be large enough for the 20-ton to deploy.  The 40 ton with it’s much larger footprint would have to make the trip back to Albuquerque, and we would have to enjoy another night in Grants. 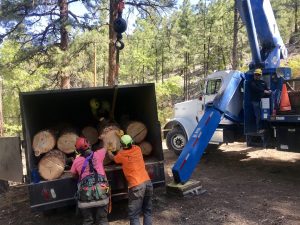 The next day, the proper machine came out and we were able to pick those huge logs from inside of the cabin. I’d never before in my life had the privilege of cutting with a chainsaw indoors! I don’t recommend it however, as the fumes get pretty bad. One of the neighbors was interested in taking the wood for firewood so we carefully loaded up each long piece in our trucks and hauled them down the road. 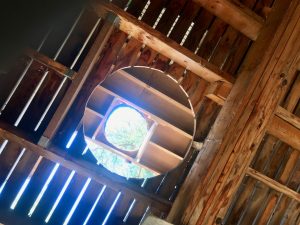 Overall, this was one of the most exciting tree removal jobs I’ve ever had the pleasure of undertaking in New Mexico! When you have a dangerous tree removal that is stumping you and your local tree services just won’t cut it, call the pros with the experience you can trust to get even the most challenging job done safely. Call Baby Gorilla Tree Service today for your free estimate.

Anthony is very knowledgeable about trees and just do great work. We have a lot of trees and they do great work at a reasonable price. He knows what needs to be done to really get them alive and looking their best while keeping the property/house safe at the same time. He also cares about the gardens and plants under the trees they are working on at t he same time. And his crew is really good as well.

Outstanding in every regard. Professional, knowledgeable and friendly crew that worked with us to get the exact results desired. Excellent work from the moment they arrived to the end of cleanup. Will definitely hire them again.

← A Walk in the Bosque ← The Rock House
Menu Title